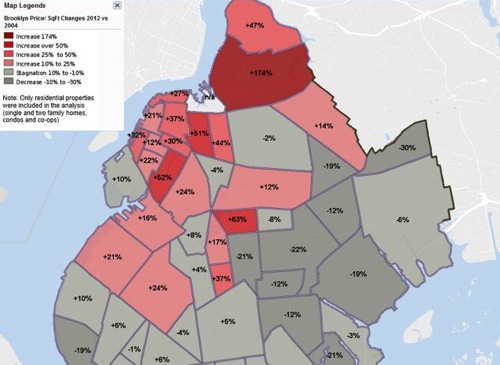 The changing demographics of neighborhoods in New York City is nothing new. The Bronx, my home borough, was originally home to Native Americans, then the Dutch, the British, Irish, Italian, and Jewish diasporas long before it is as today, with Latinos as the slight majority. Oddly enough, there are times when I’m on my home street and I can’t help but feel like an outsider. Allow me to explain:

I live in Wakefield, a primarily African American and West Indian neighborhood. I have lived here since I was 3, with the exception of my years in college. Looking back on my life, my friends, neighbors, and family as well have always been very diverse. I went to elementary school a few neighborhoods over in the Bedford Park area of The Bronx, a neighborhood far more diverse than my own. I grew up unassuming, open minded, and figuratively colorblind.

In retrospect, I feel like it took me a while to grasp the idea of ‘race’ and different ‘races’ of humans. I just didn’t see it that way. Seeing that my friends’ ancestries vary tremendously and some people in my family are of mixed races, I just didn’t take much heed as a child. I still don’t take that much heed at all nowadays….

….EXCEPT when the topic of gentrification arises. I feel like I’m caught between a rock and a hard place. When I walk through Williamsburg, Bushwick, or Downtown Brooklyn it’s almost as if there’s not humidity, but tension in the air. I can feel it lingering around every train station, bike rack, street corner, and every other public place where Native Brooklynites now co-exist and share public space with out of state, 20-something transplants, or ‘Hipsters,’ if you will. I feel that same tension pressing on my lightly tanned skin, dyed blonde hair, and casual/rocker style of dress as I walk through certain neighborhoods.

I’m a Latino who can pass as Caucasian, or even Pacific Islander depending on who’s guessing. It’s great to look racially ambiguous when you’re talking to a pretty young lady at a bar in WIlliamsburg, but once you leave that bar you become a hipster to the natives of the neighborhood, and a questionable figure to cops, wondering why they see some surfer-looking whiteboy strolling through the ghetto.

About 2 months ago I was headed down White Plains Road, the main avenue of my neighborhood and also the closest shopping district to my apartment. It makes sense that I would go down this street for an innocent afternoon of commerce, right?

Well, it didn’t make sense to the cops who saw me chatting with a tattoo artist outside of his shop.

They parked their patrol car, approached me and asked me “What are you doing around here?”

Kinda like they didn’t think I belonged in the neighborhood I have always lived in.

I told the 1st police officer that I had always lived around here while the 2nd proceeded to stop and frisk me.

He felt up my bookbag, which contained nothing but my netbook, a book I was reading and a few ‘Living Buddhism’ magazines.

“Whoa, you got a heavy bag,” said one of them, “You got a gun in here or something?”

So there I was, not even half a mile from my house, being questioned for being in my own neighborhood. I didn’t know whether to be confused or enraged. I was a mix of both, but I held my tongue. I knew better than to make the cops feel as stupid and racist as they were actually being, and I knew if I had said anything back to them things could have gone much worse.

After a few more patdowns and another “What are you doing around here?” they realized that I wasn’t exactly Tony Montana, and let me go.

This was a rude awakening to me. I never did mind growing up my whole life as a Latino in a mainly black neighborhood. I actually liked it very much, as well as the Bronx and New York City in general. I do find it alarming, however, that upon first glance nowadays I may be viewed as a neighborhood invader to my own block and as a result being on the NYPD’s radar. I usually get along with everyone I see; my friendliness and the reciprocation of such from most people I meet have allowed me to keep my inner-child’s eyes figuratively colorblind. As a child and adolescent I had always felt that I fit in everywhere. With gentrification on the rise in many minority neighborhoods in New York City, coming from a neighborhood that I’m the minority as a Latino has never mattered to me until recent years, and especially since the cops breathe down my neck as a result. Sometimes I feel like my notion that I fit in everywhere is a naive illusion; when I see an organic grocery store next to a bodega, I still feel like I could fit in at either place. There are times, however, when I feel like I don’t fit in anywhere, especially when I see a police cruiser around. -RSM

I was inspired to write this article by When Gentrification Brings Racism to the ‘Hood by Irvin Weathersby, via ebony.com.